The 7 Best Short Moral Stories with Valuable Lessons for Life 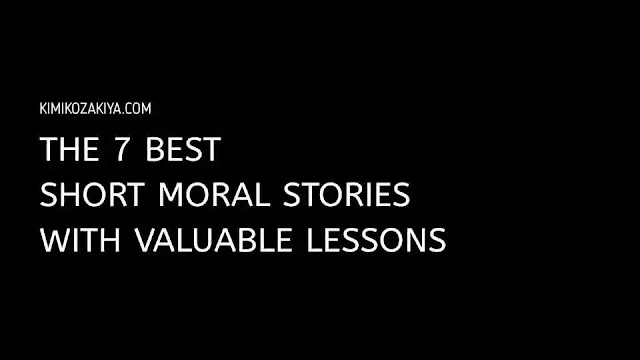 Short stories have the unique ability to convey a powerful message in a compact and impactful way. The story we will be discussing today is no exception.
With a thought-provoking plot and a moral lesson that will stay with you long after you've finished reading, this story is a must-read for anyone looking to gain a deeper understanding of the human condition.
So, without further ado, let's dive into the story and discover the valuable lessons it has to teach us.

1. "The Ant and the Grasshopper"

Once upon a time, in a bustling meadow, there lived an ant and a grasshopper. The ant worked hard all summer, gathering food and storing it away for the winter. The grasshopper, on the other hand, spent his days frolicking and singing, not giving a thought to the future.
When winter came, the ant had plenty of food to eat, while the grasshopper had nothing. The grasshopper begged the ant for some food, but the ant replied, "You should have thought about that when the sun was shining."
Moral: It's important to think ahead and prepare for the future.

Once upon a time, there was a young boy who lived in a small village at the base of a mountain. One day, while tending to his sheep, the boy became bored and decided to play a trick on the villagers. He ran into the village, shouting, "Wolf! Wolf! There's a wolf in the mountain!"
The villagers rushed to the boy's aid, but when they got to the mountain, there was no wolf to be found. The boy had tricked them. He repeated this trick several times, and each time, the villagers came to his aid, only to find nothing.
One day, a real wolf did come down from the mountain and attacked the boy's sheep. The boy ran into the village, shouting, "Wolf! Wolf!" But this time, no one came to his aid. They had grown tired of his tricks and didn't believe him.
Moral: Honesty is the best policy. If you lie, people will not believe you when you tell the truth.

3. "The Tortoise and the Hare"

Once upon a time, in a dense forest, there lived a hare who bragged about how fast he could run. The other animals often laughed at him and said, "You may be fast, but you're also very lazy."
One day, the hare was challenged to a race by a tortoise. The hare laughed at the tortoise and said, "This will be easy. I'll win the race and have time for a nap."
The day of the race arrived, and the hare took off like a shot. He was so confident in his abilities that he stopped for a nap halfway through the race. The tortoise, however, kept moving steadily and eventually crossed the finish line before the hare woke up.
Moral: Slow and steady wins the race. It's better to work hard and consistently, than to rely on natural talent and be lazy.

Once upon a time, there was a dog who lived in a small village. He was very greedy and always wanted more food. One day, while wandering through the village, the dog came across a butcher shop. The smell of fresh meat was too much for him to resist, and he crept inside to steal some.
As he was eating, he noticed a piece of meat hanging from a hook, just out of reach. He jumped and jumped, trying to grab it, but it was too high. Finally, in his greed, he managed to grab the meat, but in doing so, he lost hold of the meat in his mouth and it fell to the ground, shattering into pieces.
Moral: Be content with what you have, and don't be greedy. It can lead to loss of what you already possess.

Once upon a time, there was a young boy who lived in a small village. The boy was kind and always willing to help others. One day, while wandering through the village, he came across an old man who was struggling to carry a heavy load. The boy offered to help the old man, and together they carried the load to the old man's home.
As they were walking, the old man turned to the boy and said, "You have a kind heart. Remember this, always treat others the way you would like to be treated."
The boy took these words to heart and lived by them for the rest of his days. He became known throughout the village as a kind and compassionate person.
Moral: Treat others the way you would like to be treated. The Golden Rule is a principle that can guide one's actions and interactions with others.

Once upon a time, in a grand kingdom, there lived a prince who was very selfish. He spent his days indulging in luxuries and ignoring the needs of his people. One day, a famine struck the kingdom, and the people were struggling to find enough food to feed their families.
The prince, however, paid no attention to their plight and continued to live a life of excess. As the famine worsened the people, they started to resent the prince for his indifference. Eventually, a rebellion broke out and the prince was overthrown.
Moral: It's important to be mindful of the needs of others and not be selfish. A leader who ignores the needs of their people will not be respected or supported by them.

Once upon a time, in a dense forest, there lived a woodcutter. He was known throughout the village for his honesty and integrity. One day, while out cutting wood, he stumbled upon a golden axe. The woodcutter knew that the axe must belong to someone and, instead of keeping it for himself, he took it to the village elder to return it to its rightful owner.
As it turned out, the golden axe belonged to the king, and the king was so impressed by the woodcutter's honesty that he rewarded him with a large sum of money and a job as his personal woodcutter.
Moral: Honesty is always the best policy. It may not always bring immediate rewards, but in the long run, it will pay off.
Home